We’ve already reviewed the YESOUL S3 indoor cycle, so in this post, we’re going to address the M1 model. This indoor cycling bike has a slightly different design and comes with a fully covered flywheel. However, in terms of features, it is pretty much the same as the S3 model. It has magnetic resistance, built-in Bluetooth, and is compatible with various fitness apps.

The YESOUL M1 indoor cycling bike features a triangular frame similar to the Harison X6 model. However, it’s a bit

smaller, while the flywheel and most of the bike’s body have thermoplastic covers. Most of the tubes in the bike’s construction are oval for improved sturdiness and aesthetics. Also, all the steel tubes are double-coated with a corrosion-resistant and chip-resistant paint finish. The color for this model is black, but there is also a white version.

The bike is not too heavy either. Its net weight is approx. 75 lbs (34 kg). This being said, it can be carried and assembled by only one person. Plus, once it is assembled, it can easily be moved as its front base has two transport wheels.

Although the bike is not too heavy, it has a low center of gravity which considerably improves its stability. Also, both its base bars have adjustable levelers. Therefore, using the bike on a rubber mat is not necessary.

The YESOUL M1 bike features a four-way adjustable seat (up, down, front, back). Its upright post offers 10

adjustment positions while its horizontal slider adds several inches of front-to-back adjustment. Therefore, the bike should be able to accommodate users between 5’1″ and 6’4″ (155 – 193 cm) with no problem, allowing a complete range of motion. It is also rated for a maximum user weight limit of 270 lbs (122 kg).

The included saddle pretty decent as well. Its inner shell is made of durable nylon material. It integrates a layer of padding for improved comfort. It is contoured in order to provide a better positioning for the user. Also, its attachment system is collar-based, so in case you will ever need or want to replace it, you should be able to find a compatible saddle in basically any bike shop.

The bike’s handlebar features a pretty standard design. It offers the possibility to adopt three main grips. These are standard grip, cruise grip, and climbing grip. It does not have drop-down grips or aero grips. However, the bike does come with a dual bottle holder and a device holder. Both of them attach to the handlebar assembly.

The bike’s handlebar is fully covered by a layer of PVC foam to provide an improved and comfortable grip. It does not have pulse sensors or any other type of controls. As opposed to the seat, it is only two-way adjustable (up, down). Its post offers 8 adjustment positions.

The YESOUL M1 indoor cycling bike is equipped with a front-drive system. It integrates a perimeter-weighted 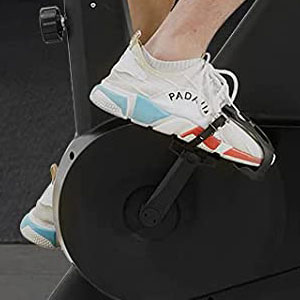 flywheel which is fully covered for improved safety. Its exact weight is not specified, but as a general idea, the flywheel of the YESOUL S3 model weighs 16.5 lbs (7.5 kg), so the flywheel of the M1 is probably in the same weight range, as the two bikes are pretty similar.

The flywheel is bi-directional. Thus, you can pedal in reverse if you want. However, the bike’s drive system features a standard exercise bike construction so you cannot coast on it. When pedaling in reverse, the resistance remains constant, given by the difficulty generated by the magnetic brake.

The crankset features a large pulley made of durable thermoplastic material with nylon-coated steel arms. The included pedals are also made of metallic alloy. They have toe cages with straps in case you need extra foot stability, but they do not have SPD clips for spin shoes. However, their threads are standard 9/16 so compatible options are widely available.

The bike’s drive system uses a poly-v belt resistant to stretching and abrasion. This belt drive system comes with several advantages over a chain drivetrain. For example, it generates slightly less vibration and noise than a chain. It also does not require periodic lubrication.

The YESOUL M1 is equipped with a manual magnetic resistance system. Therefore, you don’t need a power adapter 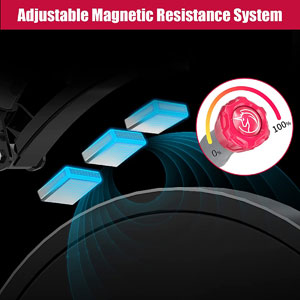 or an external power source for it. But on the other hand, since the bike is not motorized, it does not adjust the resistance automatically like the more expensive spin bikes.

The bike’s resistance system consists of a magnetic brake placed above the flywheel, connected to the tension knob on top of the frame, and concealed by the flywheel guards. Therefore, when you turn the knob, the magnets change their position in relation to the flywheel which increases or reduces the workout load.

The main advantage of a magnetic brake over a friction brake is that the brake pad does not touch the flywheel. Thus, there is no friction, no wear-and-tear, and the pedaling motion is very smooth and quiet. The brake pad does not need lubrication either, and you don’t have to worry about its replacement.

The bike doesn’t have pre-determined resistance levels like other exercise bikes. However, from the lowest resistance point to the highest, there can be distinguished approx. 100 levels of difficulty. As a general idea, with the magnets as close as possible to the flywheel, the pedaling motion delivers quite a bit of difficulty, simulating a steep climb.

The YESOUL M1 bike does not come with a fitness monitor. However, it does have built-in Bluetooth 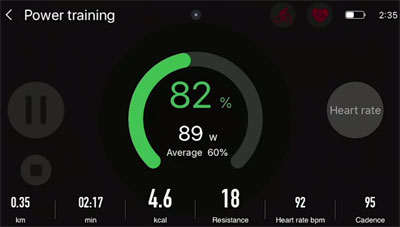 connectivity. Therefore, you can sync it with your smartphone or tablet by the means of the YESOUL Fitness app. This app is available for both iOS and Android systems. A QR code is provided with the bike which you can scan with your phone in order to install the app.

The YESOUL app shows multiple workout metrics including time, distance, speed, calories, the bike’s resistance level, and cadence. It also monitors pulse, but a heart rate monitor is not included with the bike. It should be compatible with most 5.3 kHz HR chest or armband monitors.

The YESOUL app also offers 255 minutes of scenic cycling, several courses of endurance fat burning, as well as online workout data tracking. However, the bike is also compatible with other similar fitness apps, such as Kinomap and Zwift. It is not compatible with the Peloton app (at least not so far). So, in case you already have a subscription to these apps, you should be able to sync your bike with them.

The internal Bluetooth module is battery-powered. It requires a CR2477 battery which is included. Its location is at the top of the handlebar under the insulation strip and can easily be accessed.

The bike’s main body comes pre-assembled. You only need to attach the two base bars, the pedals, the handlebar, and the support bar of the device holder and bottle holder, and the two holders. This shouldn’t take more than 30 minutes. The manual provides clear assembly instructions and all the necessary tools are included.

Since the bike uses a belt drive, lubrication of the drivetrain is not necessary. So, for maintenance, you only have to keep the bike clean and periodically check for loose parts.

The YESOUL M1 is an indoor cycling bike made for home use. It is equipped with a manual magnetic resistance system, a perimeter-weighted flywheel, and a four-way adjustable seat. It does not come with a fitness monitor but has built-in Bluetooth, and is compatible with the YESOUL fitness app, Zwift, and Kinomap. It’s a great bike for spin workouts, interval training, stamina development, and weight loss.