If you’re looking for top-quality and an affordable price in an upright bike, Schwinn is definitely a name to put on your list. Currently, they offer several upright bike models and every single one of them is well-built, meant to supply the cardio training setting you need for many years.

One of the models from Schwinn on the lowest side of the price range, is the Schwinn A10. This bike model was actually released in 2011, but it was improved in 2013 with a better console, and several other parts. This review refers to the Schwinn A10 (2013), the item model number 100328.

The bike’s frame is made of steel tubing. The only plastic parts are the shrouds of the drive system, which also cover the front-to-back base of the frame.

Overall the bike isn’t very heavy. At 54.7 lbs (25 kg), almost anyone should be able to move it without any problem. The front base has rotating caps, which should facilitate the transport of the bike, if leaned forward. The rear base also has leveling plastic caps, in order to maximize its stability on just about any flooring. Also, the Schwinn A10 is space savvy. It has quite a small footprint, taking a surface of your floor of about 19″W x 27.5″L (48 x 70 cm).

The seat of this Schwinn bike is consistently padded, and contoured for as much comfort as possible. However, it’s not cushioned, and not extremely wide as the one on the Exerpeutic 1200. It’s actually a pretty simple saddle, similar to the ones on most road bikes. It’s not adjustable horizontally, like for the Schwinn 170, but it does offer several levels of vertical adjustment. It can easily accommodate users up to 6’4″ (193 cm). Of course, taller users can also use this bike, but depending on the length of their inseam, they may not benefit from a full leg stretch.

The handlebar is angle-adjustable. In other words, you can tilt is position, depending on the posture you desire for your workout. It does not offer vertical adjustment, however. It has a multi-grip design, and it’s covered by rubber foam material for a consistent grip. Also, it features integrated EKG grips, enabling the console to track pulse. 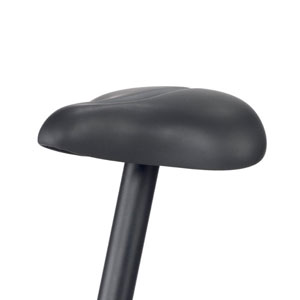 Since it’s one of the most important aspects regarding an exercise bike, we’ll start with the details of the bake system. This bike features an eddy current brake, which means it involves a magnetic brake pad and a servo motor. To adjust resistance, you change the magnet’s pull onto the flywheel.

Resistance is adjusted exclusively from the console of the bike, which makes available 8 levels of resistance. The first levels are quite easy, but the 7-8th level simulate the climb on a rather steep hill. However, depending on your level of fitness, you may or may not find the 8th level of resistance to be a challenge. But just to be clear, this bike is made for light to medium cardio, just as about any other upright bike out there.

Since the resistance of the bike is automatic, and uses a servo motor, it evidently requires to be powered on. The console can function with 4 D-type batteries, which should last for up to 10-12 hours of use. However, you can also use a PWR+ AC adapter, with an input of 100V-240V, and 9V / 1amp output. Neither the batteries nor the adapter are included with this bike. You must purchase them separately, and the adapter which costs about $13 is the best choice. Also, in case you’re wondering, you can pedal on this bike without it being powered on, but in this case you will only be able to use the 1st level of resistance, and cannot use any workout apps.

The bike features a very sturdy, steel-made crankset, which can actually support the full weight of the user even at 275 lbs (125 kg). However, this bike is not made for pedaling while standing up, as it is not a spin bike. Also, if you’re taller, the stand-up posture may feel rather awkward on this bike, handlebars being too low. The crank arms are finished with weighted pedals, with straps for maximum foot grip. Also, the pedals have standard threads, being easy to find replacements in case you don’t like them or in case they wear out.

The Schwinn A10 is equipped with a permieter-weighted flywheel, which renders a smooth pedaling motion. In other words, when the bike is set on the highest levels of resistance, this particular features helps eliminating the stair climbing effect. The flywheel is situated at the back of the bike, and it’s actually slightly smaller than the pulley. Since the bike does have a flywheel, it means the pedals won’t stop instantly and will complete one or more revolutions once you decide to stop pedaling. You can also pedal both ways, with the same resistance. However, you cannot coast as you would do on a normal road bike.

The connection between the pulley and the flywheel is done via a solid belt, resistant to stretching. And since the bike is belt-driven, the drive system doesn’t actually need any maintenance, also being really quiet.

Although the console supplied with the Schwinn A10 upright bike is not as inclusive as the one equipped on the Schwinn 170, it does offer several workout apps and amenities. To begin with, it incorporates a 2-speaker sound system, being compatible with most MP3 players, smartphones and tablets. It also includes a media tray, for your tablet or book.

When it comes to its fitness-oriented functions, the console tracks all your workout data, indicating time, distance, speed, RPM, calories, pulse, and of course, the level of resistance used. There are 6 preset programs built-in the memory of the unit, plus one Quick Start program. This performance computer also allows you to give values to your desired workout time, and counts down backwards from the desired value selected.

The console features several digits, 3 of them controlling the workout apps, 2 app on each digit. For example, “Fun Rides” includes the “Rolling Hills” and “Ride in the Park” programs, the “Mountains” digit includes “Pike’s Peak” and “Pyramids” app, and the “Challenges” key gives you the possibility to select between “Uphill Finish” and “Cross-Training”. Evidently, there are gradual arrow keys for resistance. Also, there’s the Quick Start key for the standard workout programs, and another digit for Start/Stop, in case you need to pause your workout and then pick-up where you left.

This stationary bike does not have a complicated design, thereby it’s assembly is fairly easy. All the tools required are supplied, along with the Owner/Assembly manual. As a general idea, the assembly requires you to add the bases of the bike to the main frame, the posts for the seat and handlebar, the seat and the handlebar assembly, connect the wires of the console then install the console, and finally screw in the pedals. There are clear instructions for each step in the manual, and the whole assembly shouldn’t last longer than 45 min., even if you’re not exactly handy with tools.

Since this exercise bike is a belt-driven one, you shouldn’t worry about greasing anything inside. At least not for several years of use. Therefore, maintenance basically requires keeping the bike clean, check from time to time if the bolts and knobs hold tight in place, and wipe any sweat or liquids from the console.

The Schwinn A10 is an upright bike that comes for quite an excellent price/quality ratio. Just like any other Schwinn bike, it’s well-built one, offering a great training setting for light-medium cardio, stamina building, muscle toning and weight loss. You can actually burn at least 500 calories on this bike per day, depending on the training program and time spent on it. It’s an excellent machine for anyone who wants a daily, optimal workout within the comfort of their home. It doesn’t take a lot of space, it’s quiet, easy to handle and assemble. And on top of that, it won’t break the bank.